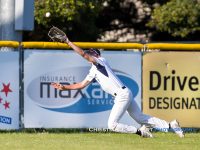 Matt Turner’s diving catch prevented Seattle City from getting a rally early in tonight’s game, and helped give starting pitcher, and former bat boy, Zach Swanson his first win of the season in a 6-3 victory over the Showcase team from the Emerald City. (Photo by Christian J. Stewart) Story by Josh Kozelj Photos by Christian […] 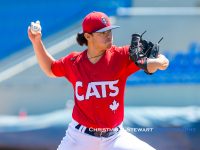