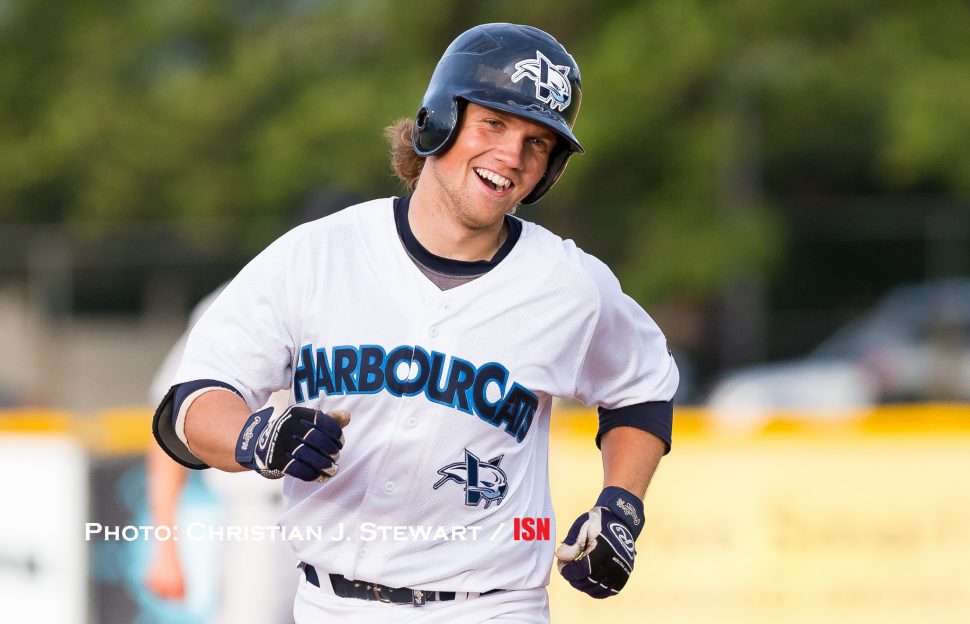 Victoria’s Riley Guntrip was all smiles after launching his first career WCL home run, a line drive over the right field fence that pulled the HarbourCats into a 3-3 tie in the bottom of the fourth inning (Photo: Christian J. Stewart / ISN)

June 18, 2016, Victoria, BC – A one-out double by Cameron Cannon in the bottom of the eighth inning scored Matt Lautz with the winning run, as the Victoria HarbourCats went on to defeat the Cowlitz Black Bears 6-4 Saturday night, to set a new franchise record with their 10th win in a row, in front of 1,452 appreciative fans at Royal Athletic Park in Victoria.

UC Berkeley incoming freshman Jack Wolger made his first start of the season for the HarbourCats and he acquitted himself well over his 3 and 2/3 innings of work, giving up just a pair of hits while striking out two. Unfortunately, one of those hits was a three-run home run to the Black Bears’ Wes Hatten in the first inning that gave Cowlitz an early 3-0 lead.

The HarbourCats would get two of those back in the bottom of the first though, as a Ben Polshuk double would score Austin Guibor (who walked) and a PJ Floyd single would score Polshuk. 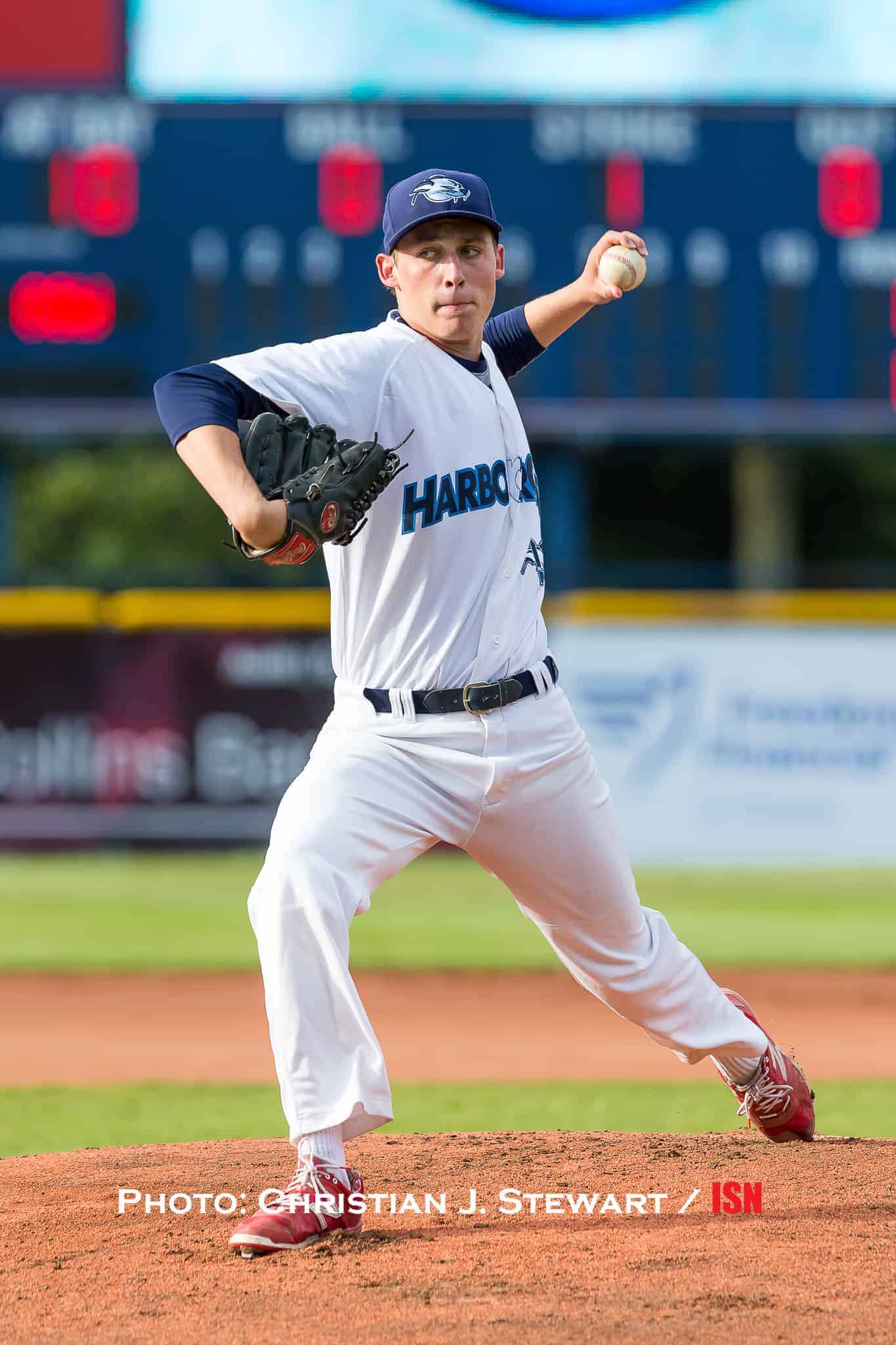 Victoria would strike again in the bottom of the fourth, when both Riley Guntrip and Cody Snider would take Cowlitz starter David Appleby over the right field fence with back-to-back, line drive home runs that gave the HarbourCats a 4-3 lead.

Reliever Casey Costello, who came in to relieve Wolger in the fourth, would get himself into trouble in the fifth, eventually walking in the tying run and that 4-4 score would hold up through the seventh, thanks to some brilliant relief work by Victoria’s Austin Dondanville, who pitched two perfect innings, retiring the six batters that he faced, striking out three. 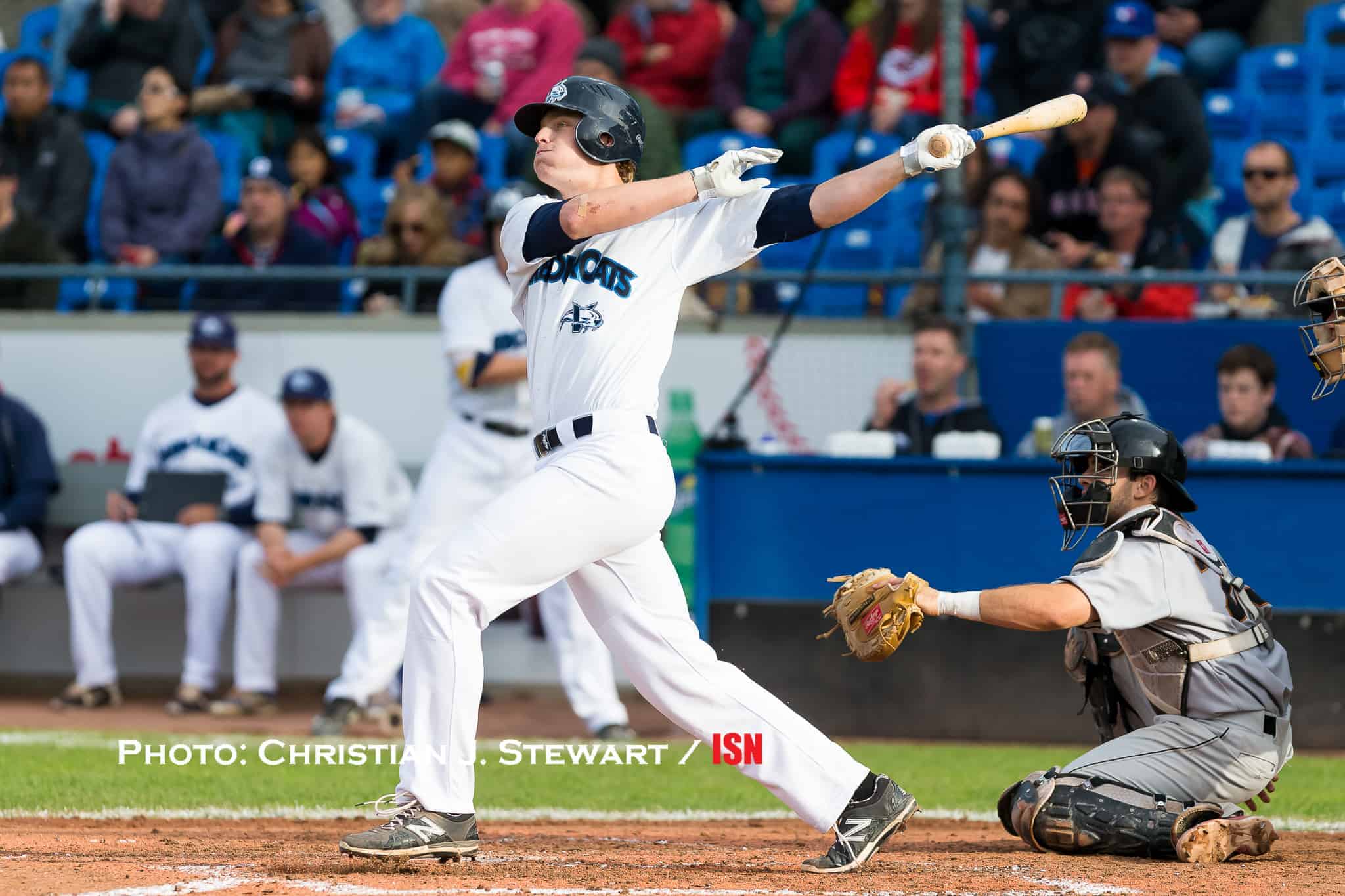 Ben Polshuk would get things started for Victoria in the first inning when his double scored Austin Guibor with the HarbourCats first run (Photo: Christian J. Stewart / ISN)

The ‘Cats would go to Holden Lyons in the eighth and after he retired the first two batters, he gave up a single and two walks to load the bases for Tim Jones, but Lyons would prevail, striking out Jones to win the battle and keep the score even.

The ‘Cats would use that momentum to their advantage in the bottom of the eighth, as Guntrip would walk to lead off the inning. Snider then moved pinch runner Matt Lautz to second with a groundout to first and then Cannon, who entered the game defensively in the seventh, bounced a double over Cowlitz third baseman Nyles Nygaard to score Lautz and give the ‘Cats the 5-4 lead. Jake Stone would then single to score Cannon, providing the HarbourCats with some insurance at 6-4. 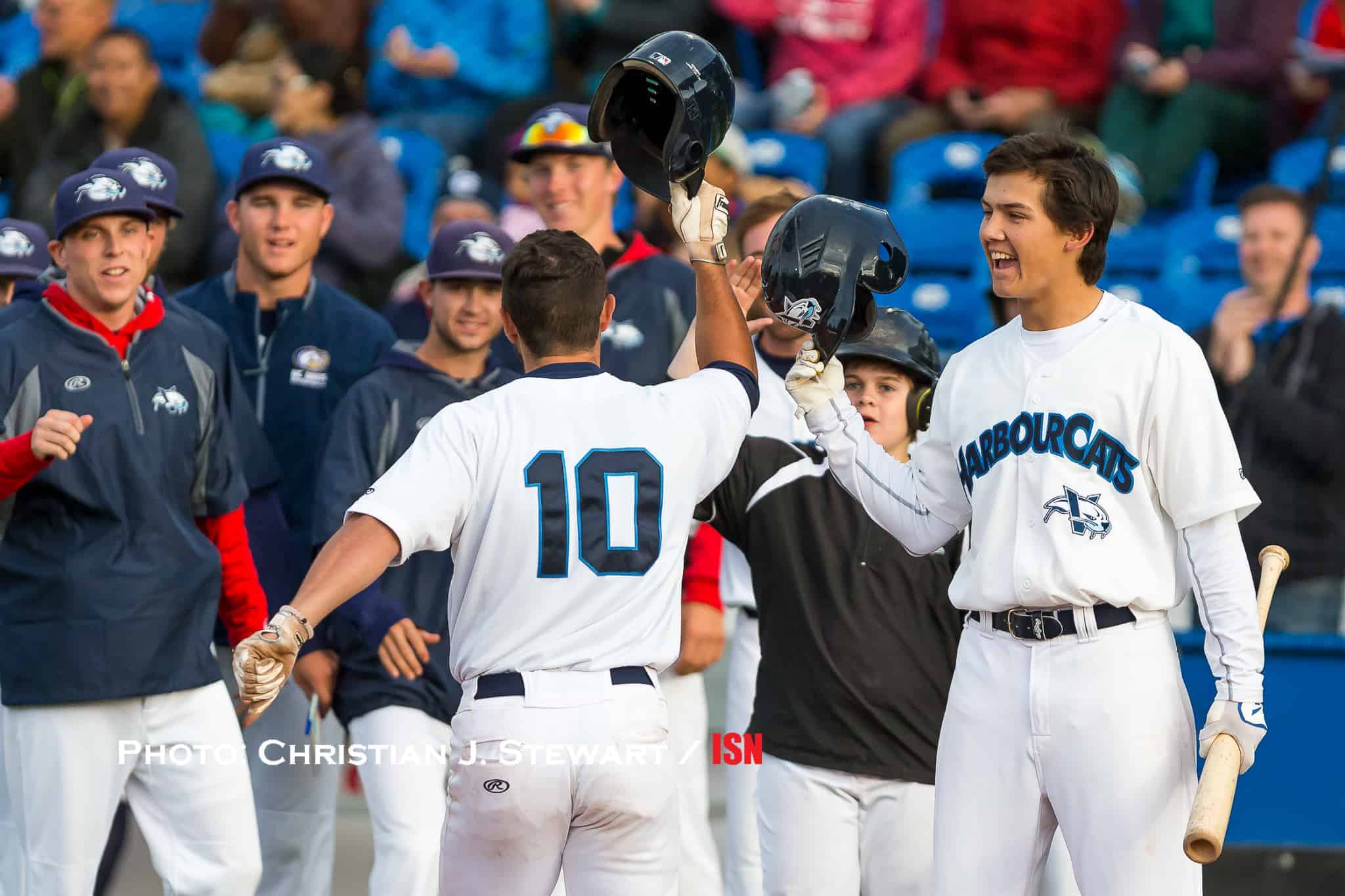 Cody Snider (10) is congratulated by Tommy Jew (right) and the rest of his HarbourCats teammates after launching a solo home run that gave the ‘Cats a 4-3 lead (Photo: Christian J. Stewart / ISN)

Lyons would come in to finish the game in the ninth and he would leave nothing to chance this time, retiring the side to close out the win and give the HarbourCats their new record win streak.

Guntrip, who finished with a home run, two walks and a run scored, was named the player of the game, while Snider also had a good night, with a pair of hits including a home run. PJ Floyd and Austin Guibor, with his first of the season, also had hits for the HarbourCats.

The win improves the HarbourCats record to 10-3 and keeps them ahead of Bellingham and Kelowna for first in the North. Cowlitz falls to 6-8 and their four game losing streak drops them into third place in the South. 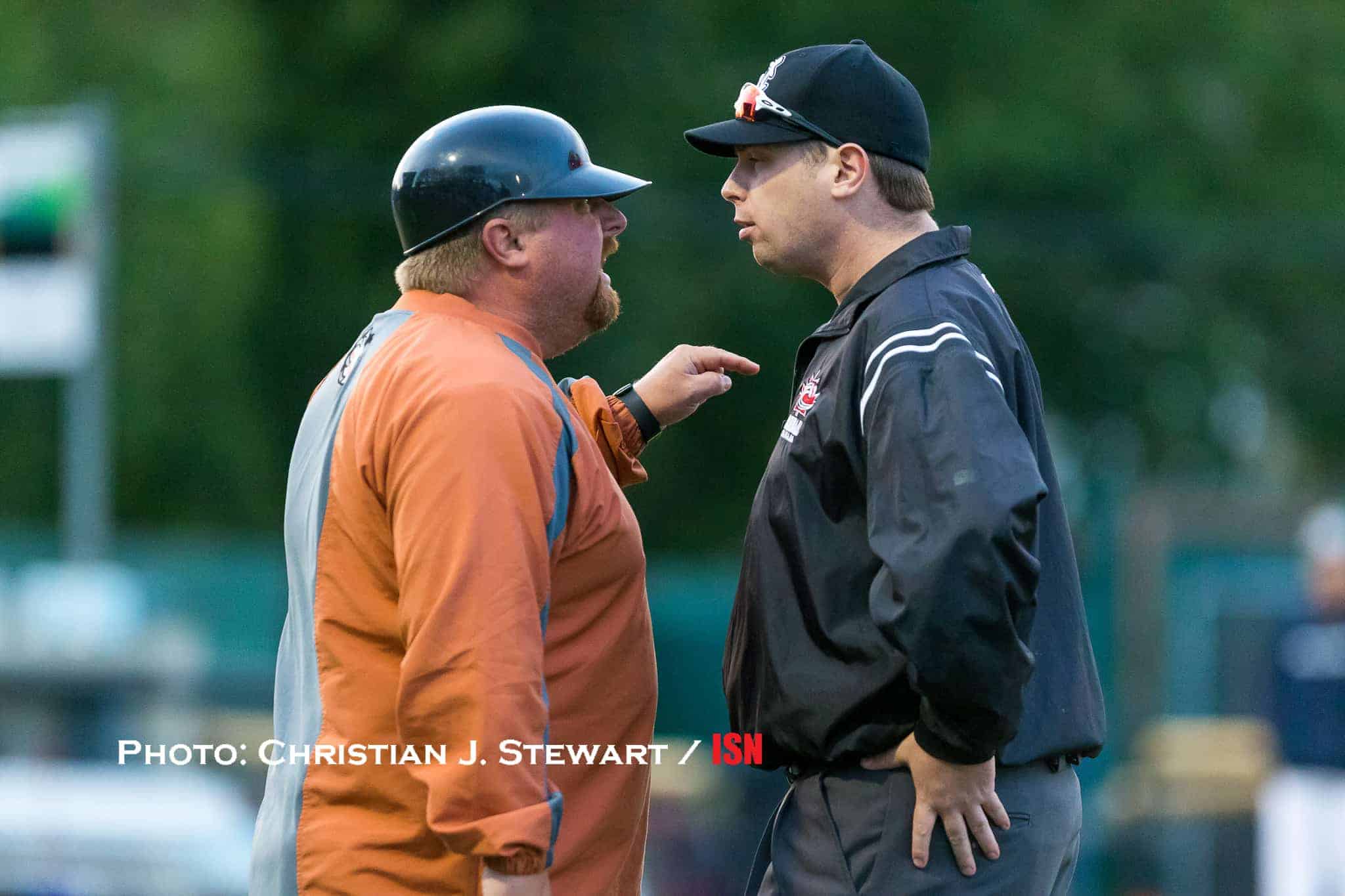 Cowlitz Head Coach Grady Tweit (left) gets into an argument with base umpire Phill Bourgeois (right) regarding a disputed third-strike bunt call. Tweit was ejected from the game (Photo: Christian J. Stewart / ISN)

The HarbourCats will look for the sweep and their 11th win in a row Saturday afternoon in a 1:00 PM matinee Father’s Day special.

Game Notes: After going 11 for 17 in his first four games, Griffen Andreychuk was 0 for 4 Saturday, as was Dakota Dean. The HarbourCats entered play tonight leading the West Coast League in WINS (9), Current Win Streak (9), Runs Scored (75), Home Runs (5), RBIs (56), Slugging Percentage (.387), On-Base Percentage (.388) and Opponent’s Batting Average (.194) and were second in Hits (119) and Team Batting Average (.299). For just the second time in team history, the HarbourCats rolled out the rain tarp on the field as a precautionary measure ahead of Saturday’s game.