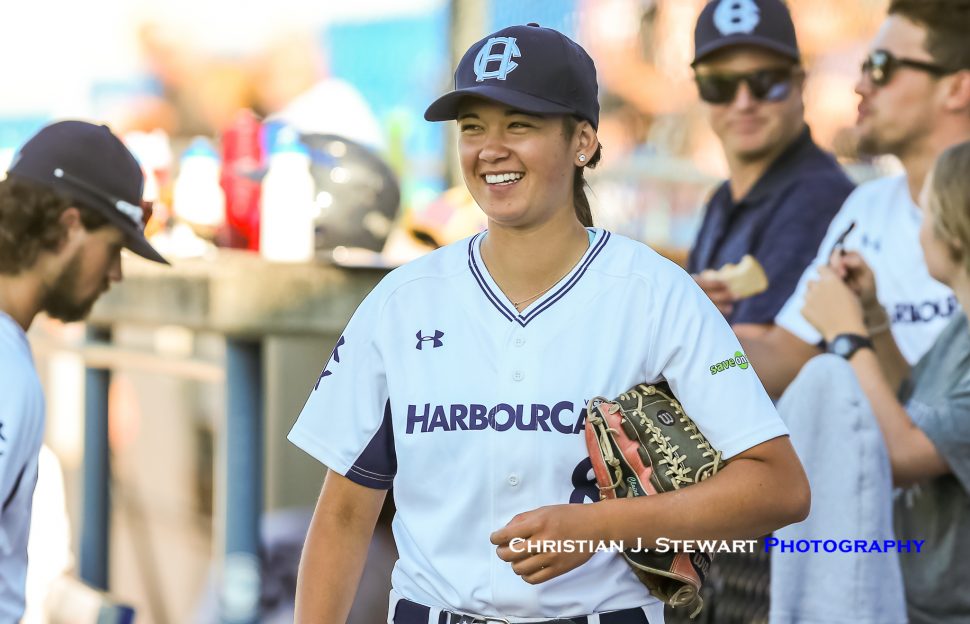 The first, and only, female player in WCL history, Claire Eccles, who made an impact beyond the diamond, will be honored by having her #8 jersey retired by the HarbourCats at the June 17 game against the Bend Elks.

VICTORIA, B.C. — Two seasons and 11 appearances on the mound for the Victoria HarbourCats — those stats are maybe the smallest part of the Claire Eccles story.

Ground-breaker and role model for female baseball players and fans around the world are the more important accomplishments of Eccles in her time in the West Coast League.

Today, the HarbourCats are officially announcing that no other player will wear #8 again for the franchise. The number will be retired in a ceremony on June 17, when the HarbourCats play the Bend Elks at Wilson’s Group Stadium at RAP.

“Each one of those 11 outings brought a level of magic and a unique atmosphere to the park,” said Brad Norris-Jones, General Manager of the HarbourCats. “The first appearance was as emotional and electric a night as we’ve had in our six years in the WCL, matched closely by her last outing, getting the last out of a win over Corvallis.”

Above all that, Eccles proved a tremendous ambassador for the game — yes, for young girls who look up to her, but also for her family, friends, and the baseball programs proud to call her theirs, in White Rock, with Baseball Canada women’s national team, and the UBC softball squad. 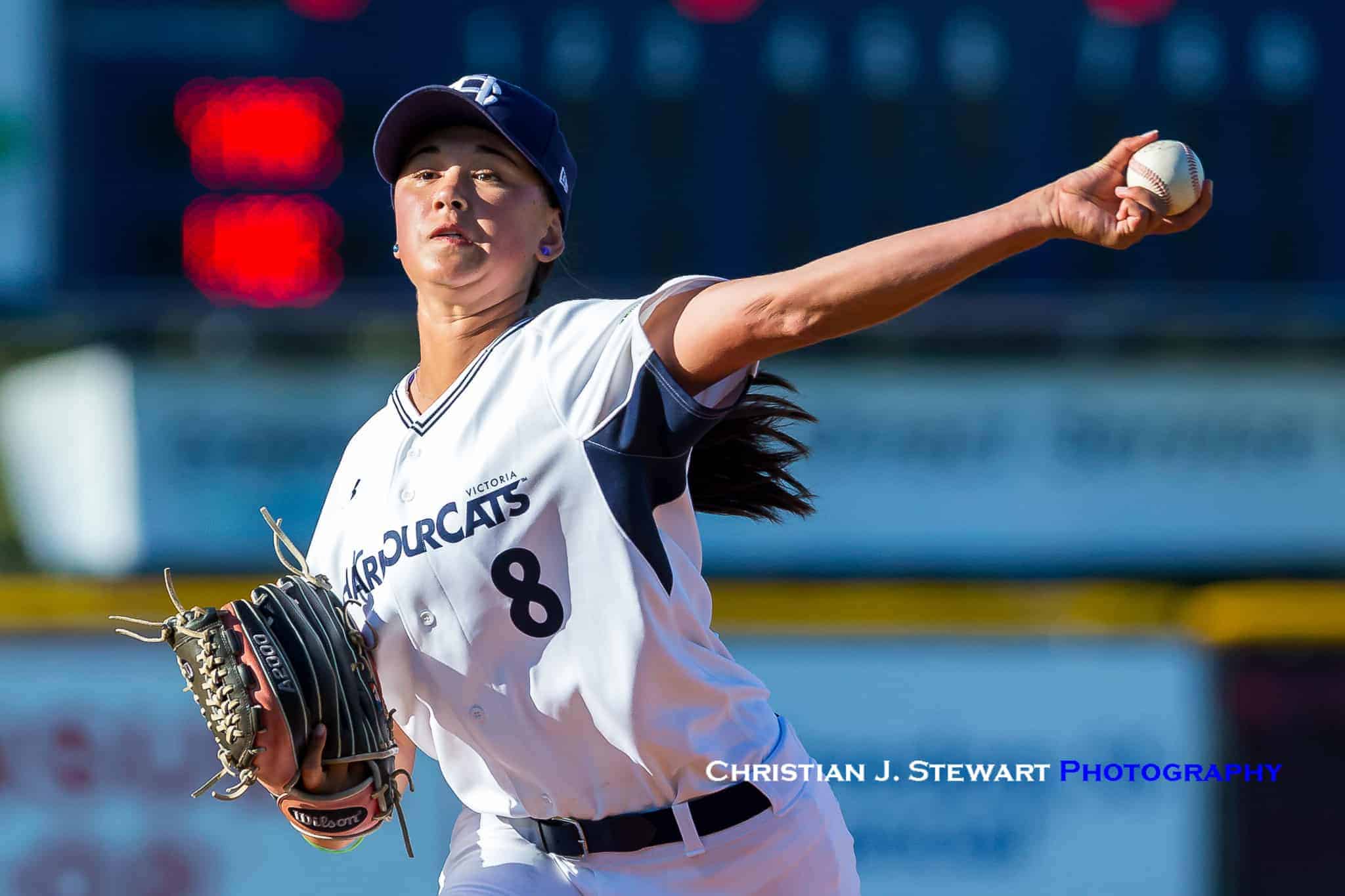 The left-handed Eccles was 2-0 with two starts and nine relief appearances over two seasons, striking out three batters — in a league where rosters are dominated by NCAA-D1 and MLB drafted players. Eccles’ time with the HarbourCats was shortened due to her Team Canada duties — including a 2018 bronze medal at the Women’s World Cup in Florida. Eccles and the HarbourCats fell a couple runs short of earning rings in 2017, losing in the penultimate game of the WCL championship series in Corvallis.

Among her memorable outings — with her signature “Hollaback Girl” entry song — was a perfect inning of relief in extra innings against the Kelowna Falcons in the heat of the 2017 pennant chase, and filling in for an emergency start against the Yakima Valley Pippins. The media picked up on the knuckleball in her repertoire, but it was the unique angle and movement on her fastball and sweeping curveball that gave lefty hitters a serious challenge.

“One of the highlights of my first season as Commissioner was getting to spend a few minutes with Claire in Victoria. I just wish I’d asked her to sign a baseball for my daughter,” said WCL Commissioner Rob Neyer.

“Claire Eccles has meant more to the HarbourCats — and for that matter, the entire West Coast League — than mere statistics can suggest, and this honour is wonderfully deserved. Claire has been a true pioneer, and I look forward to the day when nobody is surprised to see a talented woman playing in the West Coast League.”

“In her two seasons in Victoria, Claire represented the HarbourCats and the entire West Coast League with great skill and dignity, so we offer our heartiest congratulations on this richly deserved honour.”

Nearly two years ago, news of her signing earned notice around the world, and on every major news outlet in North America. People were made more aware of Victoria, of the HarbourCats, and of the West Coast League.

“Hitters respected her, that’s for sure, tipped their caps, it was always interesting to watch the varied reactions, and I hope she taught something to us all,” said Jim Swanson, Managing Partner of the HarbourCats. “But it was seeing faces of fans young and old, both genders, all walks of life, connect with her in so many ways — that was special. Claire will always be a HarbourCat, and fully deserves a place in our Ring of Honor for her bravery, her courage, to step into that spotlight, and to do it with such class.

“It took the right person, with guts, to do this. It also took the right city, market, and organization, to take what some viewed as a risk. Signing Claire was a success on every level.”

Tickets for the June 17 Claire Eccles Jersey Retirement Night are now on sale, and it is expected to be a busy night — particularly popular with our female fans who will want to salute her accomplishments. ORDER ON-LINE HERE!

The HarbourCats continue to add to their roster for 2019, and are excited to announce the signing of three pitchers and two position players — four of the group hail from Baylor, which has supplied top talent to the HarbourCats for three seasons.

RHP Matt Amrhein, junior, Cal Baptist — A fourth player from CBU, his funky delivery will provide a different look out of the pen. 6-0/178, from Uplands, CA. Pitched in 17 games as a sophomore, fanned 24 and walked 10 in 18.1 innings.

C Kyle Harper, red-shirt freshman, Baylor — A 6-0/190lb from Houston from Cypress Creek HS, is a righty hitter known for his character and leadership. Can also play OF and 1B.

RHP Blake Helton, Baylor — A 6-4/175 freshman from Austin, hard and heavy fastball expected to develop into 90s. Tossed a no-hitter and one-hitter as a high school senior, the latter a seven-inning gem with just 66 pitches thrown.

RHP Branson Wilson, Baylor — Freshman from Fort Worth is 6-3/190, hard-thrower, was first team All-State in both baseball and football (wide receiver and defensive end). Conference pitcher of the year as a high school senior.

SINGLE GAME TICKETS can now be ordered on-line at http://harbourcats.ticketrocket.co or by dropping in to the HarbourCats offices.

Our off-season office hours at 1814 Vancouver Street are now 10:00 am to 5:00 pm Tuesday through Friday. We are closed (or by appointment only) on Monday, Saturday and Sunday.