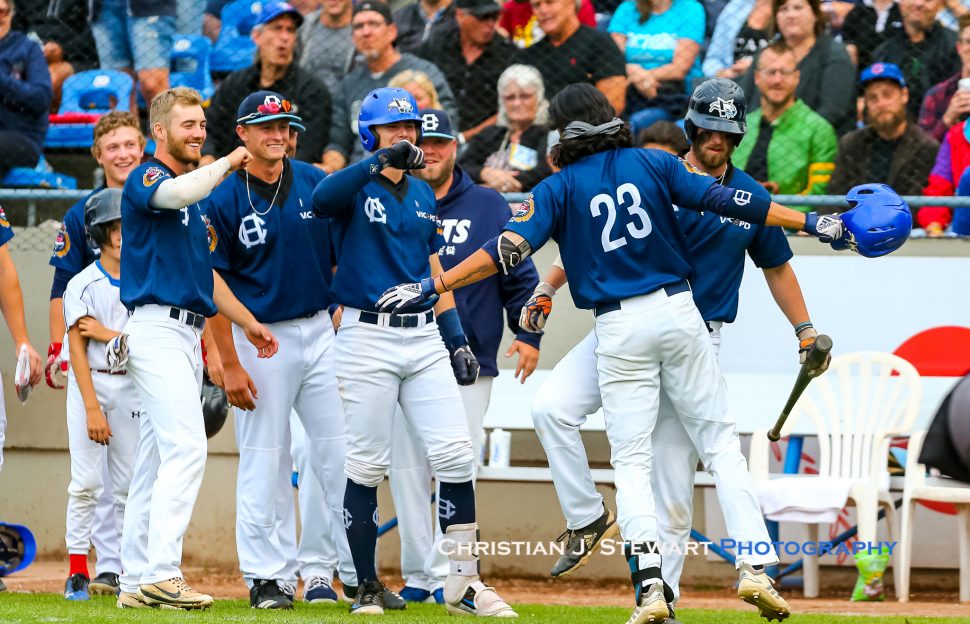 Nick Plaia sprints into the dugout, and celebrates with his smiling teammates after hitting a leadoff home run in the bottom half of the first inning. Plaia also recorded his 34th career stolen base as a HarbourCat in the second, tying him with Alex De Goti for the franchise record. (Photo by Christian J. Stewart)

VICTORIA — The Victoria HarbourCats (19-6/37-15) defeated the Port Angeles Lefties 21-5 Friday night at Wilson’s Group Stadium for their sixth straight victory, and became the first team in the 14-year history of the West Coast League to score over 400 runs in a single season. 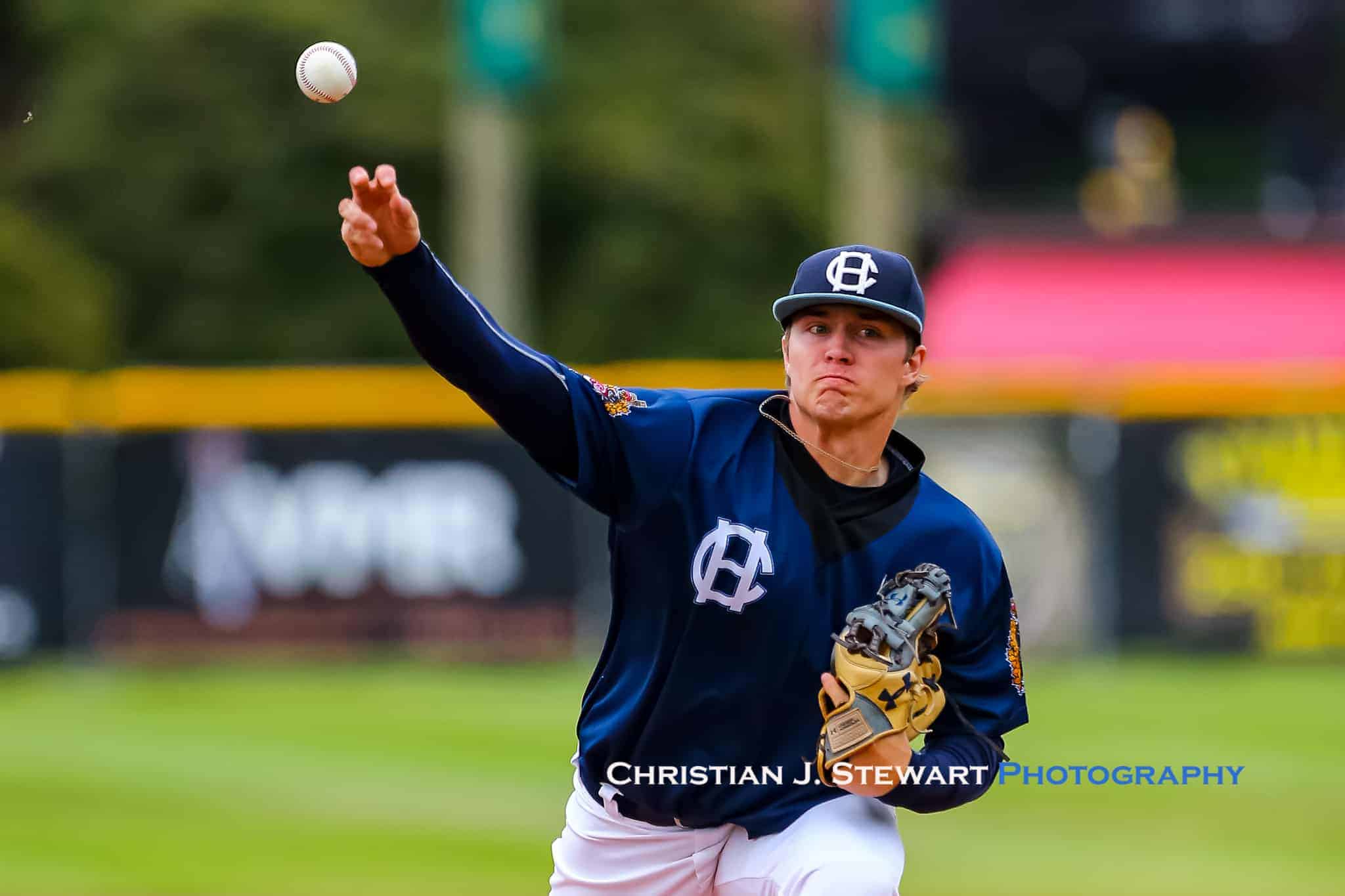 Dakota Hawkins retired the first nine Lefties to begin the game, and ended the night with five strikeouts over three innings. (Photo by Christian J. Stewart)

The win was also Victoria’s fourth consecutive win over Port Angeles, since the two teams wrap up the 2019 WCL regular season with a six-game home and home series. The HarbourCats concluded a three-game sweep of the Lefties last night at Civic Field in Port Angeles—outscoring the Lefties 36-5 in the series—and didn’t stop hitting as the series shifted across the strait of Juan de Fuca to Vancouver Island. 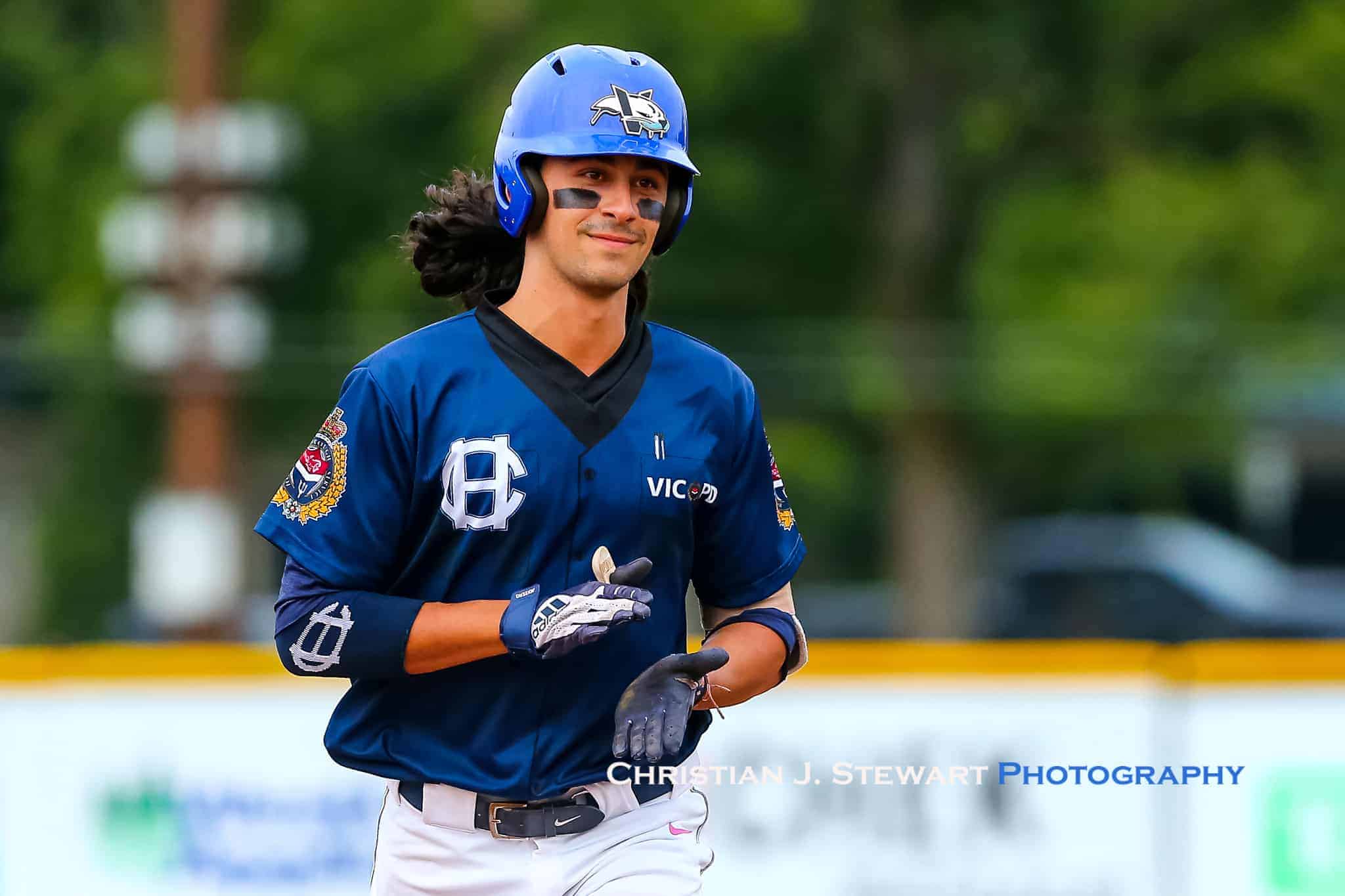 Nick Plaia lets out a small smile while rounding the bases after his first inning home run. (Photo by Christian J. Stewart)

After Dakota Hawkins retired the side in order in the top half of the first, Nick Plaia launched the first pitch of the game from Port Angeles starter Zach Tresemer over the left field fence to draw first blood for the HarbourCats.

Batting up next, Gus Wilson smacked a single on the second pitch of the game, and advanced to second on an error. Griffin Paxton then hit another single for Victoria’s third straight hit to start the game, and one batter later Harrison Spohn doubled the ‘Cats lead to two with a sacrifice fly. 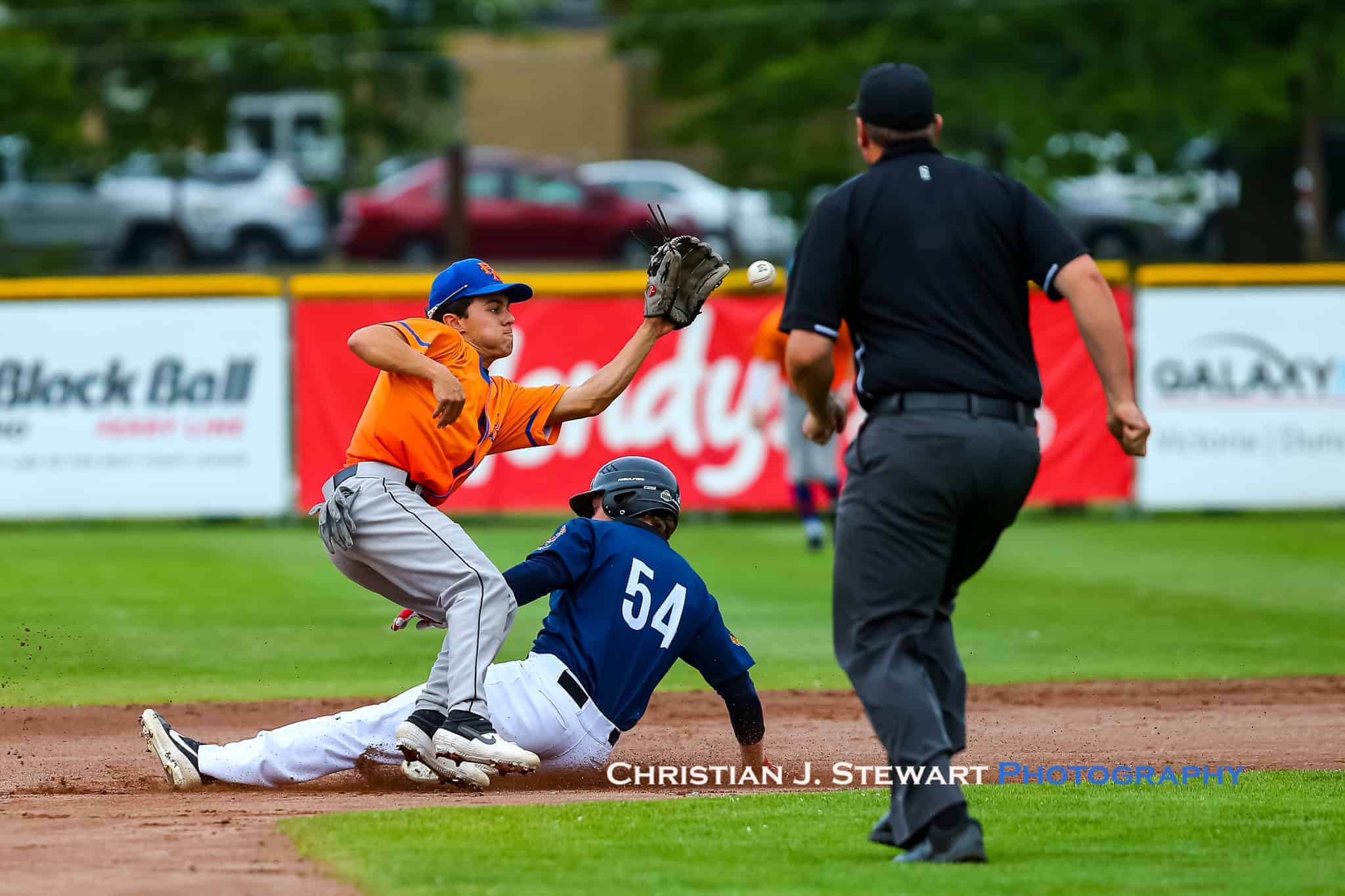 Sherick slides safely into second base earlier in the game. The Seattle University product finished with three hits and three runs on the night. (Photo by Christian J. Stewart)

Kyle Sherick then notched Victoria’s third single of the inning to move Paxton to third, and the HarbourCats executed a double steal with Spohn running for second and Paxton charging to home to make it a three run lead. Ty Schindel capped off the four-run frame with another sac-fly.

In the home half of the second, after advancing to first on a fielder’s choice, Plaia stole second for his 34th career stolen base as a HarbourCat—tying him with Alex De Goti for the franchise record. Plaia would advance to third on an error, and scored on the third sac-fly of the game to make it a five run Victoria advantage. 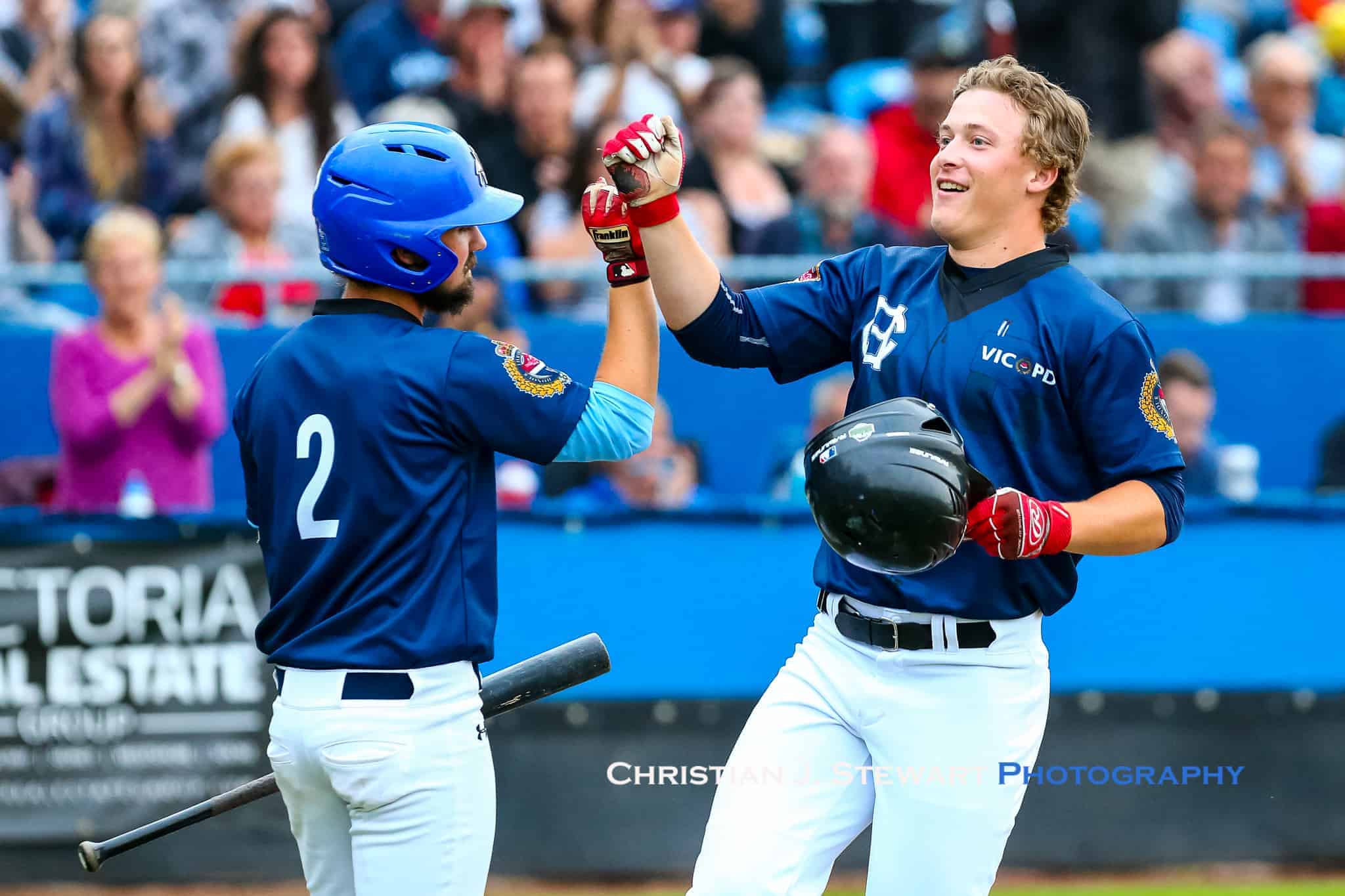 Kyle Sherick fist bumps with Tanner Haney after a solo homer in the third. The home runs was Sherick’s second of the year. (Photo by Christian J. Stewart)

One inning later, Sherick hit a solo home run that bounced off the glove of a leaping Dylan Cyr in right field, but the Lefties started to find some offence against Hawkins in the second time through the order.

The righty from Lower Columbia walked Gavin Rork to begin the fourth, and Brad Altomarie hit a RBI triple for Port Angeles’ first hit of the game that ended the night for Hawkins. He finished with five strikeouts in three innings, giving up two earned runs after Damiano Palmegiani hit into a fielder’s choice that scored Altomarie. 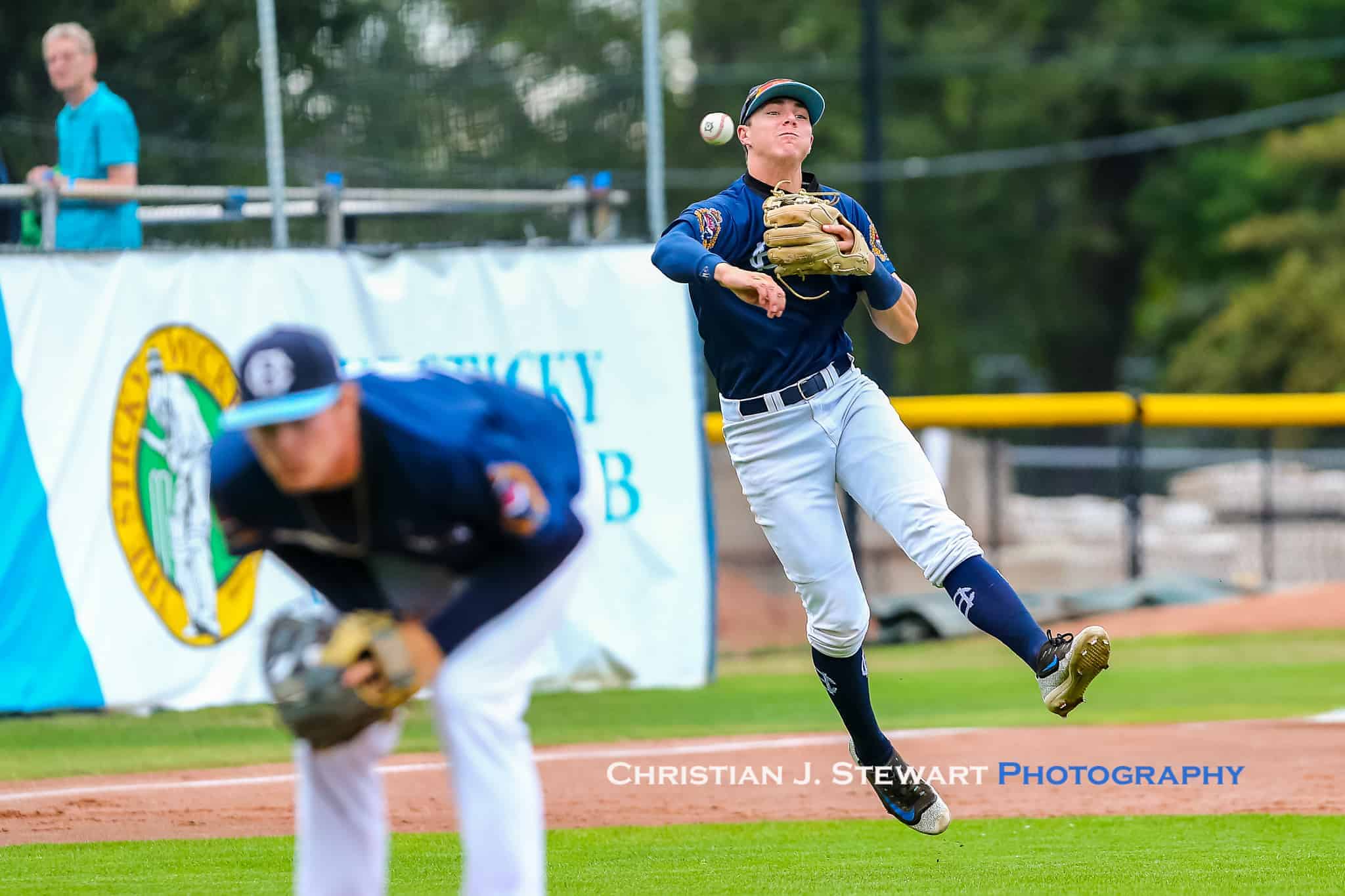 Harrison Spohn makes an acrobatic throw from third base in the game. Spohn also had an RBI at the dish tonight. (Photo by Christian J. Stewart)

Port Angeles cut the lead in half with a run in the fifth, however, Victoria jumped back in front by six with a three-run homer from Nick Adams—the outfielder’s third home run in the past four games.

Moving into the sixth, the Lefties scored another run, but Victoria once again responded immediately with three runs in the bottom half—highlighted by a Ty Schindel RBI double. 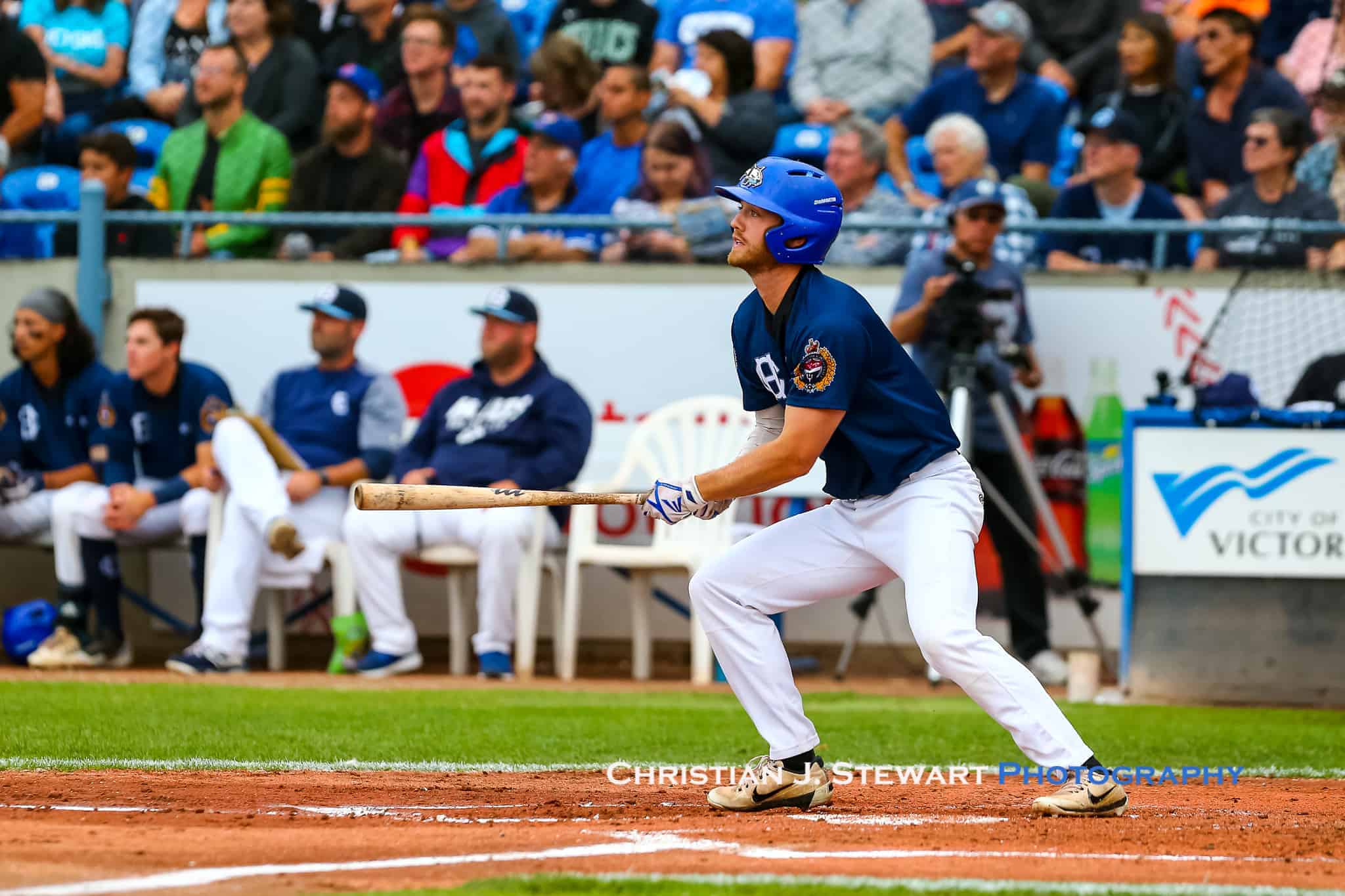 With 381 total runs scored coming into tonight’s game, the ‘Cats already set the single season run record and led the next closet team (Corvallis, 343 runs) by 37 runs, but crossed seven more runs in the seventh to bring their 2019 total to 401 to break the 400-run barrier. Liam Balance’s solo homer in the eighth upped the run record to 402.

The HarbourCats will look to tie their longest win streak of the season, and gain their fifth straight victory over the Lefties, tomorrow night. First pitch is scheduled for 6:35pm on fireworks night at Wilson’s Group Stadium at Royal Athletic Park.