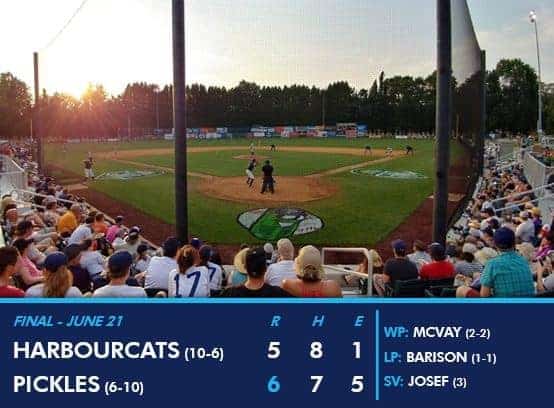 The Victoria HarbourCats let a victory escape their clutches in Portland, with the Pickles scoring four runs in the bottom of the eighth and escaping with a 6-5 win on Friday night.

The big swing for Portland, with two outs and two strikes, came off the bat of Gabe Skoro — a three-run shot to the short porch in left, in a small park that yields the most home runs in the WCL.

Connor Barison took the loss in relief. Hunter Hennigh threw four strong innings, with just one hit and a walk with three innings with three strikeouts, followed by Ryan Watson’s three innings featuring six strikeouts. Luka Green had a rough start to the eighth, setting the stage for the four runs, giving up two hits and a walk and leading to three runs allowed.

Bradley McVay posted the win, with Joey Josef notching the save for Portland, 6-10 on the season.

The HarbourCats, tied for first in the North Division with the Bellingham Bells, are now 10-6.

Kyle Harper was 2-4, including a solo home run. Harrison Spohn was 2-4 with a pair of doubles.

The two teams meet again Saturday, with RHP Jack Hyde of the University of San Diego slated to throw for Victoria.

The HarbourCats are home next Tuesday-Wednesday-Thursday, hosting the Wenatchee AppleSox.