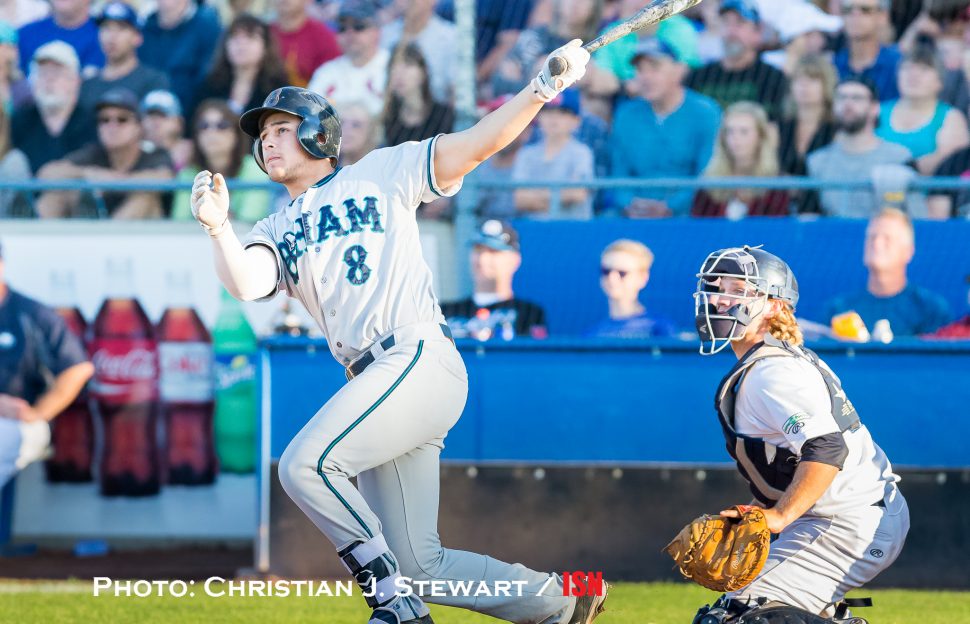 August 10, 2016, Victoria, BC (ISN) – Just like that, the dream is over.  After a record setting campaign that saw the Victoria HarbourCats set a new West Coast League  (WCL) record of 40 wins and a establish a WCL record 19-game win streak, the HarbourCats season and hopes of a WCL championship came to a screeching halt Wednesday, as they dropped a 12-1 decision to the Bellingham Bells in game two of the North Division playoff series at Royal Athletic Park in Victoria.

With the Bells winning 3-2 in Bellingham on Tuesday night, Wednesday’s win gave them a sweep of the best-of-three Divisional series and advances them to the WCL Championship Series against the Corvallis Knights, who defeated Yakima Valley 7-3 Wednesday, to sweep the South Division series 2-0.

Victoria’s Josh Mitchell got the start Wednesday and gritted his way through one inning before leaving the game with an apparent upper body injury (Photo: Christian J. Stewart / ISN)

Wednesday’s game marked the first time there has been playoff baseball in Victoria at this level since 1952, but the Bells had no respect for that history as they jumped on Victoria starter Josh Mitchell for two quick runs in the first inning, after a single from  Shane Hanon and then a two-run home run from Chase Strumpf, well over the fence in left.

Bellingham’s Tyler Palm started Wednesday for the Bells and held the HarbourCats to just one hit through the first four innings (Photo: Christian J. Stewart / ISN)

Mitchell would get out of the inning without further damage, but sadly,  that would be the end of the night for him, as he left the game after the inning with an apparent upper body injury.

That put reliever and the scheduled game three starter, Will McAffer, into a tough position, as he came on to start the second inning and promptly gave up back-to-back walks to Gunnar Schubert and Austin Shenton to start the frame.  After a sacrifice bunt, Danny Casals and Andru Cardenas had back-to-back singles to score Schubert and Shenton respectively.  Strumpf then followed with his second home run and fifth RBI of the night and suddenly the Bells had jumped into a 7-0 lead.

Ben Polshuk would have the only HarbourCats hit through the first four innings Wednesday (Photo: Christian J. Stewart / ISN)

The HarbourCats would finally break through on Bell’s starter Tyler Palm in the bottom of the fifth, when a Jarron Silva double would score PJ Floyd (fielder’s choice) to cut the score to 10-1.   Palm, who to that point had allowed just a pair of HarbourCats hits, was removed after that, finishing his night after 4.2 innings of work.

Ryan Anderson would have a hit Wednesday and would also finish the season with a WCL leading 14-game hitting streak (Photo: Christian J. Stewart / ISN)

The Bells would continue their offensive outburst with two more runs in the top of the sixth, keyed by RBI singles from Jake Veith and Schubert, moving the lead to 12-1.

Jeff Gelinas, in relief of Palm, Joey Matulovich, Josh Zavizubin, Sam Hellinger and a Bells defence that seemed to make one spectacular play after another, would shut the HarbourCats down the rest of the way to seal the win and send the Bells off the Championship final.

Bellingham’s Jake Veith would have a hit and an RBI in the win against Victoria on Wednesday (Photo: Christian J. Stewart / ISN)

Despite the loss, it has been a phenomenal year for the HarbourCats, both on and off the field, from a WCL record 19-game winning streak, to a WCL record 40-win season, to the team leading the league in a number of offensive and defensive categories, to a WCL record total attendance of over 60,000 people and a single game attendance record of 5,133 set on June 30th. The team truly has lived up to their “Grand Slam Season” slogan, hitting it out of the park every night and providing some of the best baseball and best baseball entertainment this town has seen in a very long time.

We can hardly wait to see what season five has in store!

It was a sad handshake lineup for the HarbourCats as their season came to an end Wednesday against the Bells (Photo: Christian J. Stewart / ISN)

Game Notes:  Ryan Anderson finished the season with a 14-game hitting streak, the longest of the entire 2016 season by any player.  Anderson overtook teammate Brad Pluschkell who had a 13-game streak earlier this season