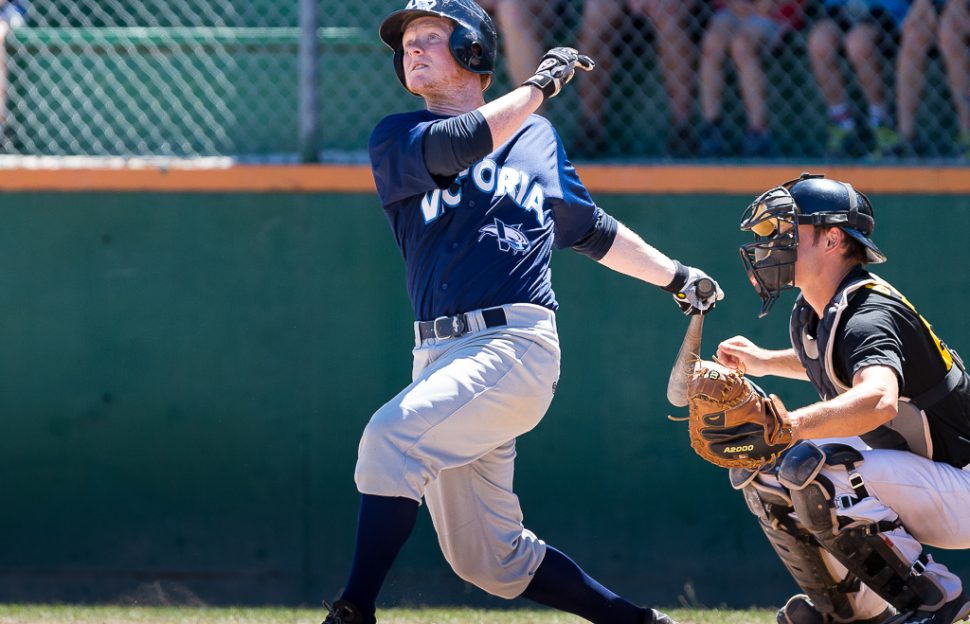 Above: Former Victoria HarbourCat and Nanaimo native Griffin Andreychuk in action for the HarbourCats at a 2015 game against the Nanaimo Pirates at Serauxmen Stadium in Nanaimo (Photo: Christian J. Stewart)

May 18, 2018, VICTORIA, B.C. — The West Coast League’s Victoria HarbourCats will be setting foot in the Harbour City this summer, playing a Nanaimo team at Serauxmen Stadium on Friday, July 27.

The non-league game, being set up by the Serauxmen Stadium Advisory Board (SSAB), will start at 6:00 pm, and SSAB members will be selling tickets in the community.

This will be the third time the HarbourCats, now in their sixth season in the West Coast League, will be holding a game in Nanaimo — a community which has indicated an interest in a West Coast League team of its own.

“Nanaimo is a great market with an historic stadium in Serauxmen Stadium, and a great love of baseball going way back,” said Managing Partner of the HarbourCats, Jim Swanson.

“There is a lot of great work being done by the board to not just maintain Serauxmen Stadium, but to polish the jewel of baseball in Nanaimo. It’s a stadium that, largely because of the interesting status it had while formerly part of school district lands, hasn’t reached its potential — but very well could. It’s a very reasonable amount of investment needed to move the park to the next level.”

The HarbourCats, known for their creative uses of the space at Wilson’s Group Stadium at Royal Athletic Park in Victoria, are supportive of the exploration of expansion opportunities in the WCL, and especially Nanaimo. The mid-Island city would provide a natural geographic rival not just for the HarbourCats, but also for the Port Angeles Lefties, the Bellingham Bells, and Kelowna Falcons.

“Our board is focused on developing Serauxmen Stadium into one of the best baseball facilities in B.C., and this region, and we know the love of baseball that exists in this area,” said Lorne Goodall, President of the SSAB. Goodall’s son Garrett, playing college at Embry-Riddle, will play for the HarbourCats this summer.

Past Nanaimo and mid-Island residents who have starred for the HarbourCats, who first started play in 2013, include Griffin Andreychuk, Adam McKillican, and Alex Rogers.