HarbourCats Ink Four More for 2019, Three from U of Hawaii 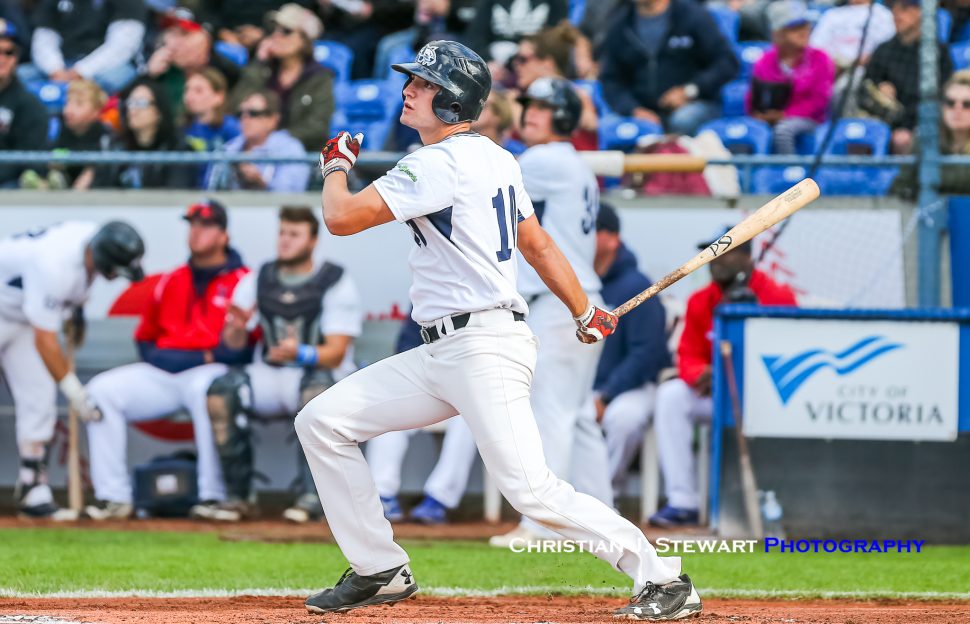 The University of Hawaii’s Dustin Demeter, who played for the HarbourCats in 2018, will return in 2019 along with two other Rainbow Warriors (Photo: Christian J. Stewart)

Dustin Demeter, who played 29 games in 2018 with four home runs, 19 RBIs and six stolen bases while hitting .250, will get a second season in the B.C. capital. Demeter (DEMM-ett-er) is a junior from Goleta, CA.

Also sent to the HarbourCats, who are entering their seventh season in the West Coast League, for the summer of 2019 by UH Head Coach Mike Trapasso, are two pitchers — both right-handers in Calvin Turchin and Aaron Davenport. From Duvall, WA, Davenport is a 6-0/180 freshman whose brother has been with the UW Huskies, while Turchin is a sophomore from Federal Way, WA, who will fill out a uniform well at 6-4/225.

Turchin transferred from NWAC-JC school Bellevue, where he was 5-2 with a 4.27 ERA. Davenport’s stats as a senior at Cedarcrest are hard to comprehend — a 0.28 ERA, giving up 22 hits and striking out 107 batters in 50.1 innings. He did not give up a triple or home run last spring, and walked only 18.

“We have had a lot of success with Rainbow Warriors players, some tremendous character people in players such as Ethan Lopez, Colin Ashworth, Alan Baldwin and Kekai Rios, who is now doing well in pro ball with the Milwaukee Brewers organization,” said Jim Swanson, Managing Partner of the HarbourCats. “Davenport and Turchin are quality arms that can make an immediate difference for Hawaii and for us. And Dustin — he fit like a glove with our program, and we’re very happy to have him back. He gives us a great starting point for setting up our infield, his key will be to get healthy after some nagging issues that slowed him a bit last summer.”

The fourth player announced as signing today is RHP Grayson Jones, a Dallas product who is at James Madison University, a 6-0/195 sophomore. Jones is an honours student while taking finance, the epitome of an impact pitcher who is also succeeding in the classroom.

2019 Season Tickets and 10-game Flex Packs are now on sale!  Book or renew your season tickets by FRIDAY, September 21st to be renewed at 2018 pricing – saving $25 to $125 depending on section – receive free playoff tickets and be entered into a draw to win a luxury round trip for two to Vancouver on the V2V Vacations ferry!

To order season tickets or 10-game flex packs, drop in to the office at 1814 Vancouver Street (open 10 AM to 5 PM Tuesday thru Friday), or give us a call at 778-265-0327.  You can also e-mail Christian J. Stewart, our Assistant General Manager, Ticketing and Media at chris@harbourcats.com.

With our 2018 season now being complete, our off-season office hours (to December 1) at 1814 Vancouver Street are now 10:00 am to 5:30 pm Tuesday through Friday. We are closed (or by appointment only) on Monday, Saturday and Sunday.