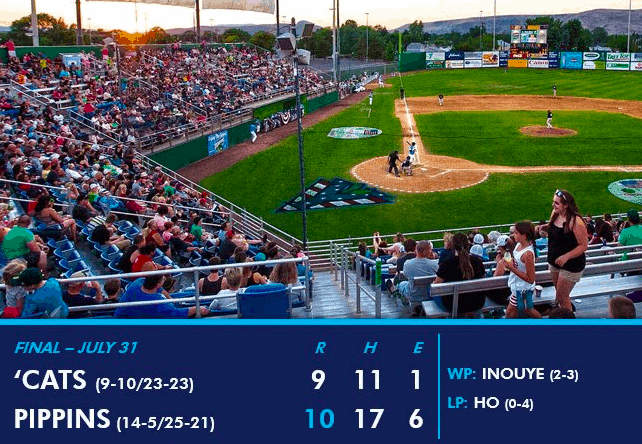 YAKIMA, WA — If there was one word to describe the 2018 Victoria HarbourCats it would be inconsistent. Leading by seven through three innings, it looked like the ‘Cats were well on their way to earning a decisive series opening win over the North division leading Yakima Valley Pippins.

However, just like a series two weekends ago in Port Angeles that saw Victoria blow back to back multiple run leads, the HarbourCats once again jumped out to an early lead but couldn’t hang on in the latter stages in a 10-9 loss to Yakima Valley.

Dustin Demeter got the scoring started with two outs in the first, smacking a hot shot line drive to the Pippin third baseman who muffed the ball and allowed Nick Plaia and Hunter Vansau to score and give the HarbourCats an early 2-0 advantage.

Kyle Dean and Jake Moberg then responded immediately in the home half of the inning for Yakima with matching RBI base hits to tie the game.

The scoring continued right into the top half of the second, when the HarbourCats put a crooked number on the board with sending nine batters to the plate in the inning.

Hayden Jaco started the frame with a double and advanced to third behind a Tanner Haney ground ball, then Victoria collected six hits in the next seven at-bats in a six run inning to go ahead by a score of 8-2.

Yakima then started to slowly chip away at the lead throughout the game, scoring twice in the fourth to chase starting pitcher Garrett Goodall. The righty out of Nanaimo, B.C. finished with a solid start on the mound, two strikeouts and yielding four runs on seven hits in four innings on the mound.

The Pippins climbed to within a run one inning later in the fifth with trifecta of RBIs from Cole Jones, Cody Jefferies, and Tyler Hollow.

Victoria was stymied by Kaleb Strawn out of the Pippins bullpen, collecting only two hits in 4 1/3 innings pitched through the games middle frames.

Ahead by one going into the bottom of the eighth, Yakima tied the game with a Cole Pokek RBI double, and one inning later showed why how have won 14 of their past 19 games in the Second Half with a ninth inning rally.

Tyler Lasch’s RBI single gave the Pippins a walk off victory, and put the HarbourCats playoff hopes on the brink.

Entering the game, the HarbourCats trailed the Pippins by four games in the North, and now see that lead extend to five with only eight games left in the season.

The HarbourCats will send Gunnar Friend to the mound tonight at 6:35 in hopes of splitting the series, and get back to within four games of the division leaders.