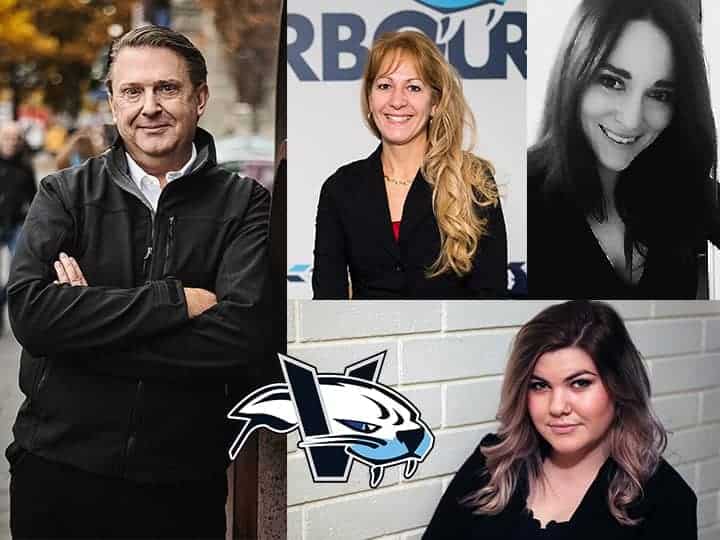 December 18, 2017, VICTORIA B.C. – The Victoria HarbourCats are pleased to announce changes to their key front-office team as preparations continue for the sixth season of West Coast League baseball in the B.C. capital.

Named to the position of Assistant General Manager, Ticketing and Media, is Christian J. Stewart (photo above, left), who is very well known for his many roles in the local sports community – as a photographer and writer working with ISN and chronicling local baseball and other sports. Christian has worked as an actor, was part of various baseball association boards, was a successful minor baseball coach, and has an impressive list of accomplishments over his 30-plus-years working both in the business world and with a camera in his hand.

Christian was an original part of the HarbourCats organization prior to the team’s first pitch, so this is a return to a rightful role with Vancouver Island’s premier baseball organization. He takes over many of the roles previously held by Brittany Wilson (nee French), who recently married former HarbourCats coach Andrew Wilson. Christian will continue to provide the team with the fantastic game-action and team photography that our fans have come to know and love.

“We look for talent on the field – but we also have talent in our key people in the front office, with Christian and GM Brad Norris-Jones, and the others we are announcing today, Katrinka, Anna and Lyandra,” said Jim Swanson, Managing Partner of the HarbourCats.

“It’s fantastic to have Christian return with the franchise at this stage of operation, it’s a perfect fit for what we need to be better at as we move forward. Christian’s main focus will be engaging with the community and enabling people through ticketing, with group and corporate options, and making sure the media have everything they need to continue their tremendous coverage for 2018. He has touched the operation in such a positive manner in just about every way without being part of staff – he and his wife Carolyn hosted players last year, so he is able to help in that area with a full understanding of what it means to be a host family.”

Also joining the HarbourCats is Katrinka Green (photo above, top centre), whose family has looked after 11 players over the past three seasons. Green, a native Nova Scotian well-known from her time working with Royal Roads University, is the Host Family Coordinator, and will work side-by-side with Stewart, Norris-Jones and the coaching staff to ensure our players are well-cared for while members of the HarbourCats. Green, a Victoria resident for 20 years, now works for Adamek Financial.

“Katrinka’s energy and understanding of the host family needs make her a perfect choice for this key role in our organization, moving forward for 2018,” said Norris-Jones. “The Greens are all-involved, their son Ryder has been a bat boy, Katrinka’s husband Tyler helps out with field duties, and they’ve been a great home-away-from-home for players such as Hunter Vansau, Harrison Bragg, Josh Mitchell, and others.”

The last staffing addition for the summer is the exciting announcement that Lyandra (Andy) White (photo above, bottom right) will be assuming the gameday role of Box Office Manager. Formerly the team’s Ticketing Manager, White will work with Stewart to ensure a smooth entry for all fans on game days at RAP.
“Andy’s experience and understanding of our systems will be invaluable, she knows our people and our fans, and has been part of the HarbourCats from the beginning,” said Norris-Jones. “The work Andy does will allow Christian and Anna to focus on other important parts of the HarbourCats game experience.”

The HarbourCats are also adding Camosun students Hamilton Mack and Giuliana Crozier to the mix, two local products who will be assisting Brad, Anna, Breyn Banks, and our media production crew of Jason King, Dan Salmon and Dave Marshall with all things game-day.

**BLUE JAYS/MARINERS WEEKEND IN SEATTLE — August long weekend
The HarbourCats are also pleased to be teamed once again with Wilson’s Transportation and Flight Centre to offer a three-game, three-day trip to Seattle to see the Mariners host the Toronto Blue Jays (Aug 3-4-5). The cost, based on double-occupancy, is $899 per person, or $825 per person for our season ticket holders. It includes bus travel, ferry, two nights of hotel at the Embassy Suites in Lynwood, shopping trips, opportunities for golf, and lower-level tickets to three games at Safeco Field.

**NEW MERCHANDISE IN
The HarbourCats are starting to stock the shelves for Christmas with some new hat, t-shirt and knick-knacks arriving recently. Decorative Christmas balls, team mugs, lanyards and other items have now arrived. The new Island Proud t-shirts, along with some ladies styles, are in the shop now and for sale.

**GREAT TEACHERS CONTEST
The HarbourCats continue to take nominations for the Great Teachers Contest, sponsored by Mayfair Optometric Clinic. The winner for November was Mr. Hurst, who at Campus View Elementary, and his whole class will be our guests at the annual SCHOOL SPIRIT GAME on June7, a special 11am start time.

Each month until May, the HarbourCats will select a teacher, whose class will be guests of Mayfair Optometric Clinic at the team’s annual School Spirit Game – a day-game on Thursday, June 7, slated for an 11am start.

SEASON TICKETS STILL AVAILABLE
The HarbourCats have seen an uptick in season ticket purchases, and as corporate partnerships are completed, the selection of season ticket locations and single-game walkup options is getting less and less. Seats in the Diamond Club, the two-year-old on-field section are sold out with a waiting list, but there remain available seats in the padded/served Campbell Real Estate Club Section, and in the Main Grandstand.